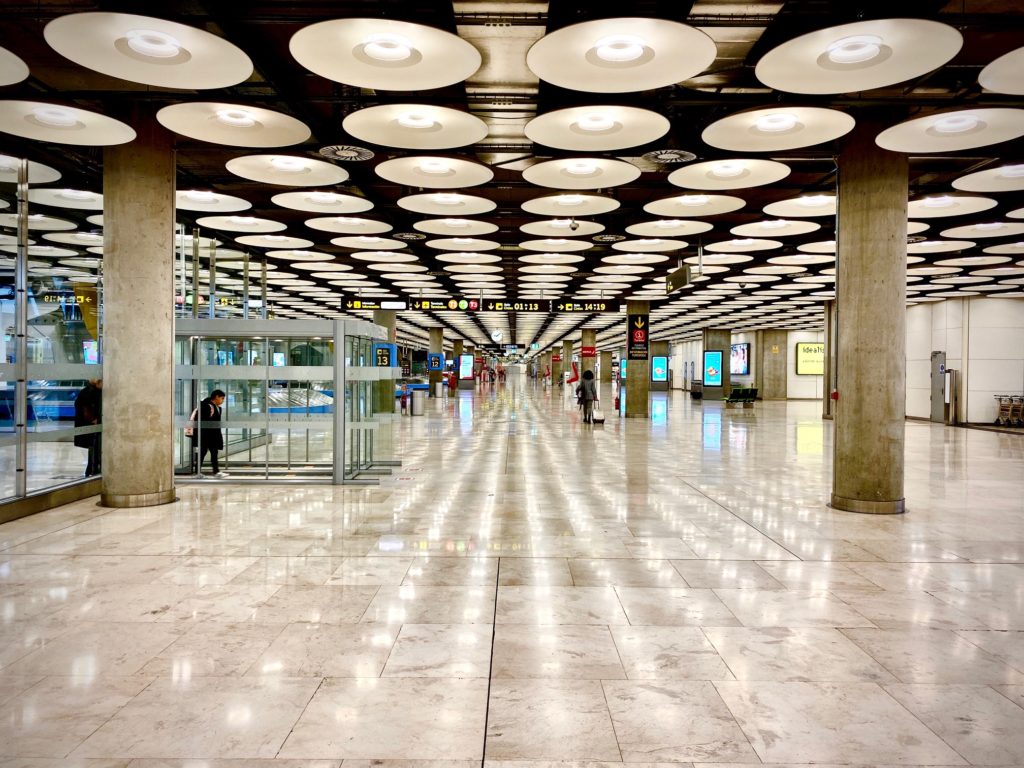 As soon as we arrived in Madrid, Airport, our driver Jose picked us up and drove us right to Mahou brewing. We got a tour of the building, and learned all about their brewing process and how the place works. After the tour, we had a beer sampling in the taphouse. Our tour guide (another Jose), told us about their barrel-aging process, and how they have been experimenting with other new beers. After the tour and tasting, we headed over to Roll Madrid for some lunch. The food was amazing, and it was cool to see a Founders sign hung out front of their building. After lunch, we headed to the hotel for some much needed rest. When we got to the hotel, there was a bunch of Founders beers on ice waiting for our arrival. We stayed at The Plaza Mayor, with a great view of the town square. 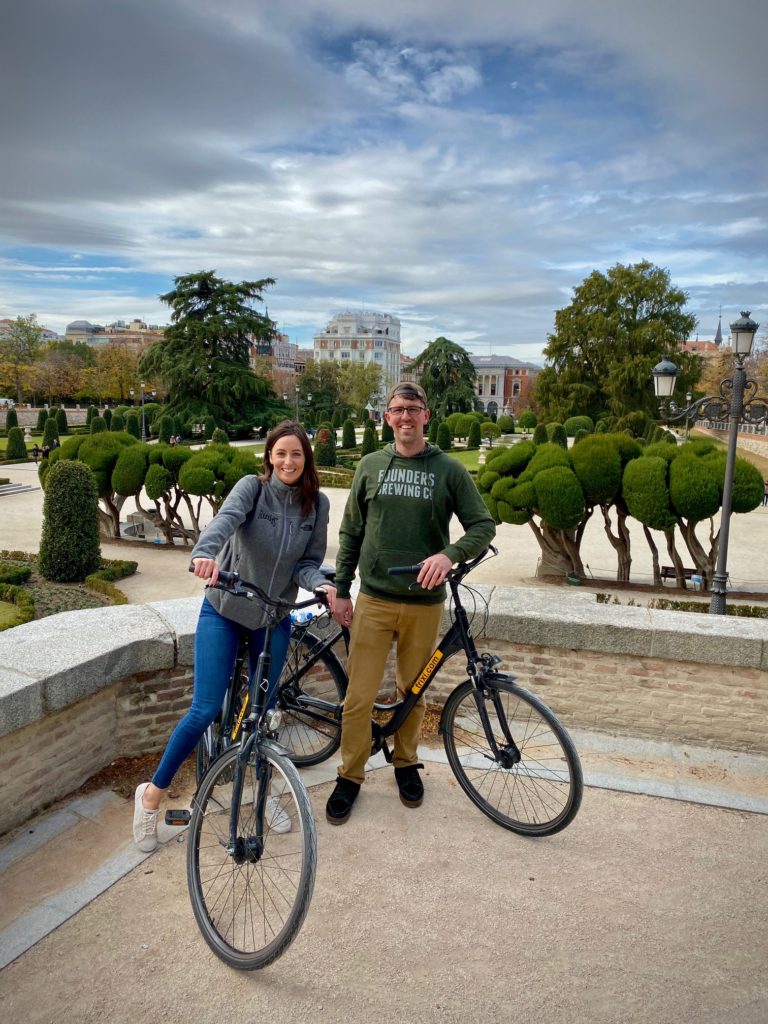 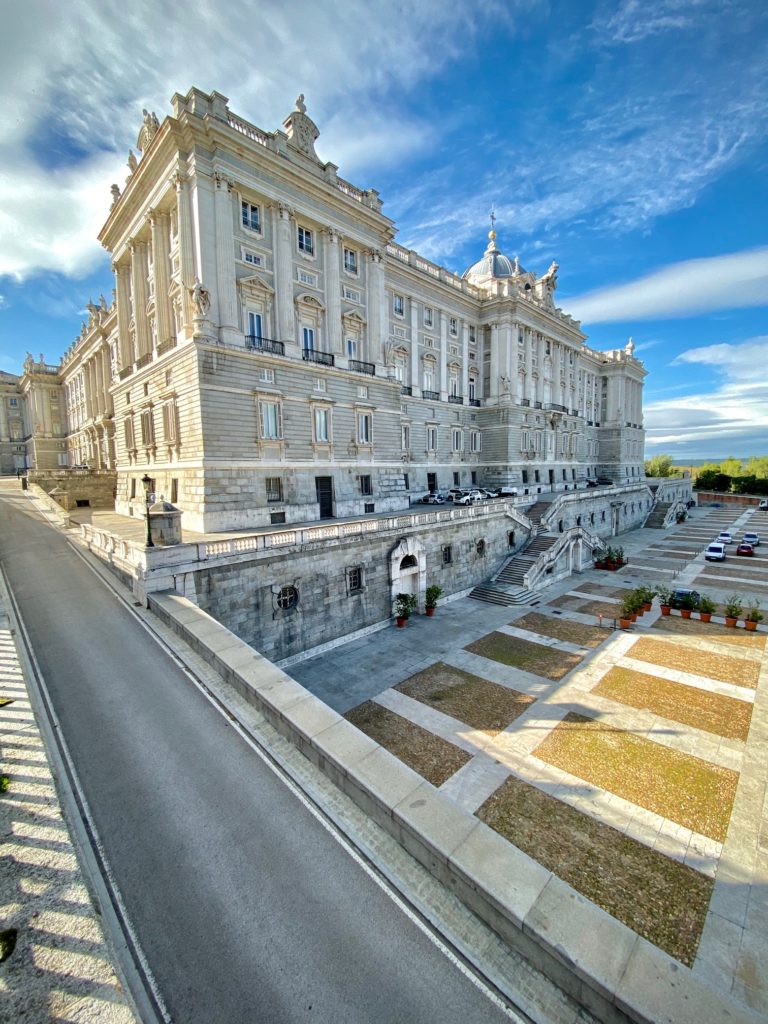 Day 2 in Madrid was a blast! We started our day off with a little walk around town to explore some of what was around our hotel. saw some cool sights and got to know the area a little bit. Then headed back to the hotel to grab some all days for our bike trip. We walked to trixi bike rentals where we met our tour guide and grabbed our bikes. We did a 10 mile ride around the city where we got to learn about the history of Madrid. We got to see the Royal Palace and the private royal garden that use to only be available to the king and queen at the time. After a good pedal around the city, we came back to the hotel and rested before our beer paring with Paou and Fernando from Mahou brewing and Fernando, a beer specialist at Cervecista Shop (a local bottle shop). At the sampling we got to try many Mahou beers, along with the new session IPA collaboration with Mahou and Founders. After the tasting, Fernando took us out for a night on the town trying out some local spots and some food/wine local to Madrid. 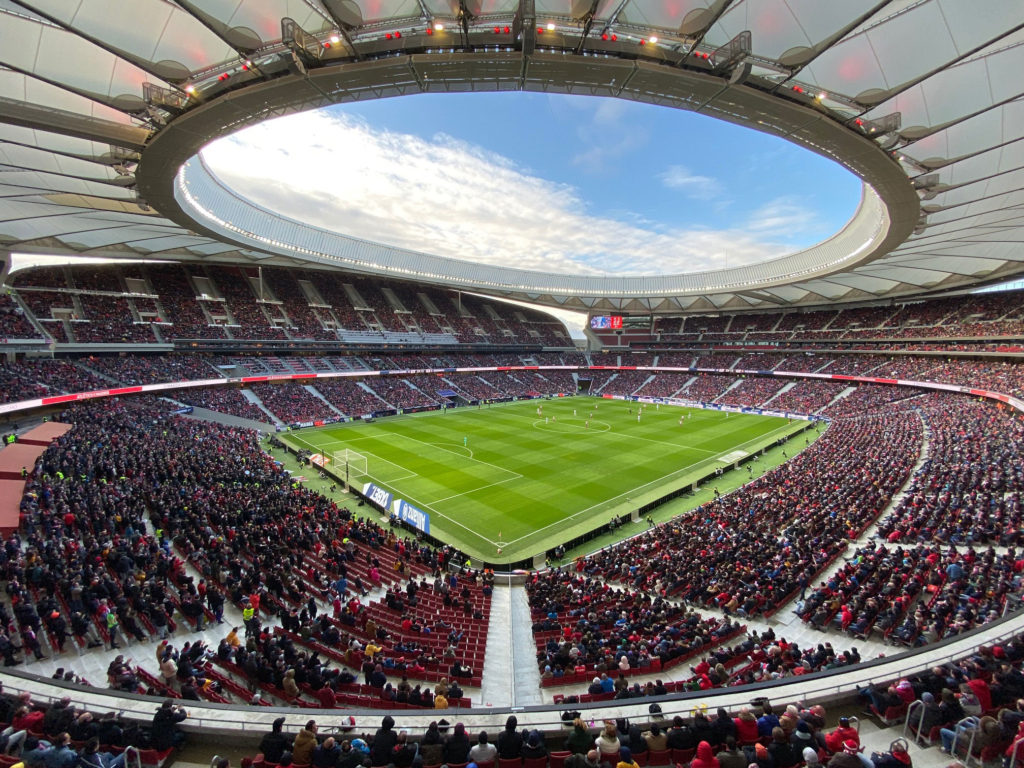 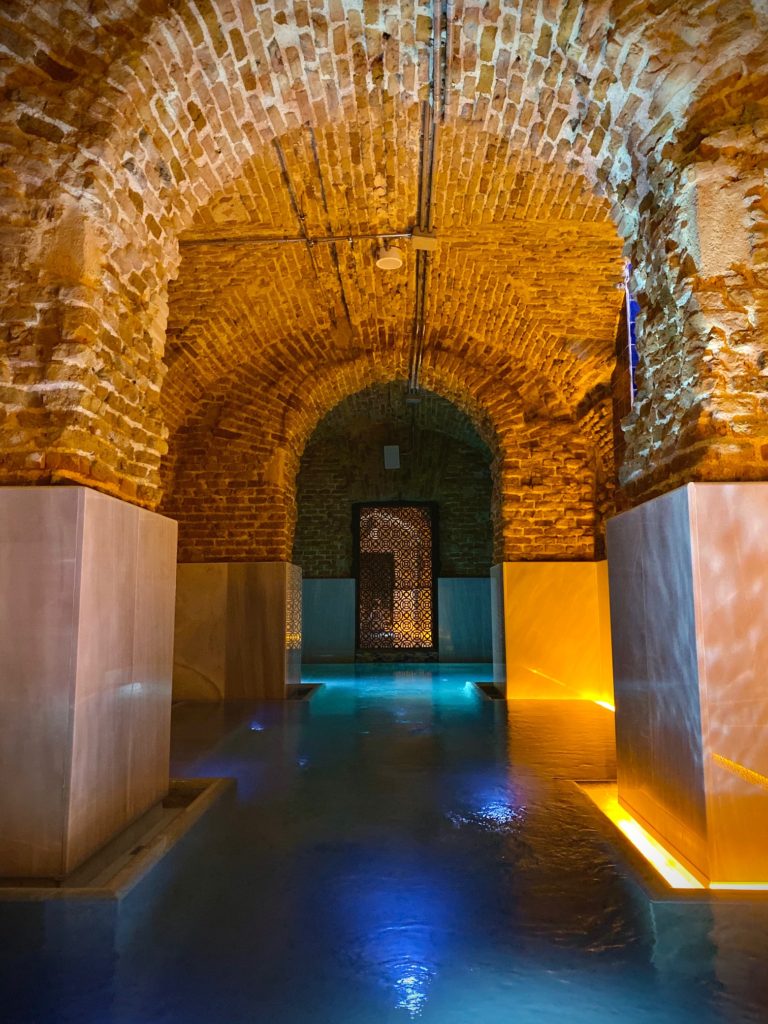 Day 3 of Madrid started with a nice relaxing morning in the spa. We floated around the pool for a while before getting ready for our Madrid vs. Espanol football game. We were so surprised when we showed up to find out that we had reserved seats in the private Mahou suite. We were greeted with Mahou club wristbands and were able to have all the drinks/ food we wanted. It was truly a great experience to watch a football game in Spain. They are very dedicated and true to their teams. After the game, we headed over to La Tape for a special Founders beer/food pairing. we got to try some of my Founders favorites while enjoying some food with a Spanish touch. Although I love all the beers we tasted, my favorite pairing was the KBS with the Tiramisu cake. It was so rich and sweet, it paired well with the oaky bourbon richness from the KBS. We were pretty worn out and full after that and walked back to the hotel to get some rest for the next day. 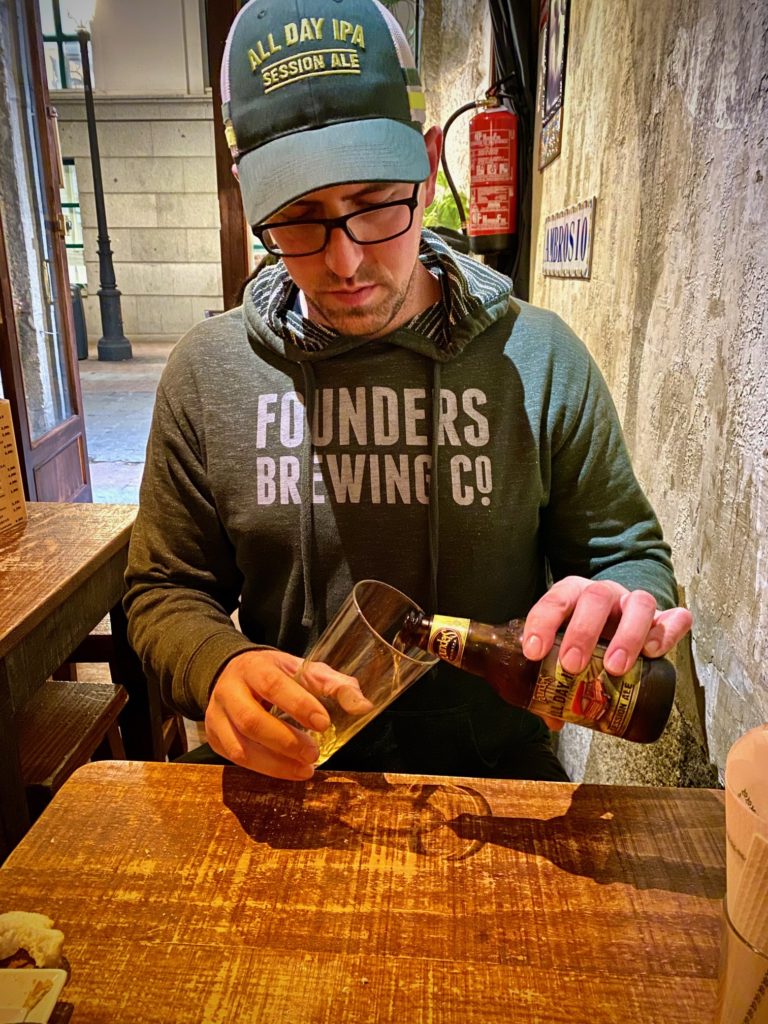 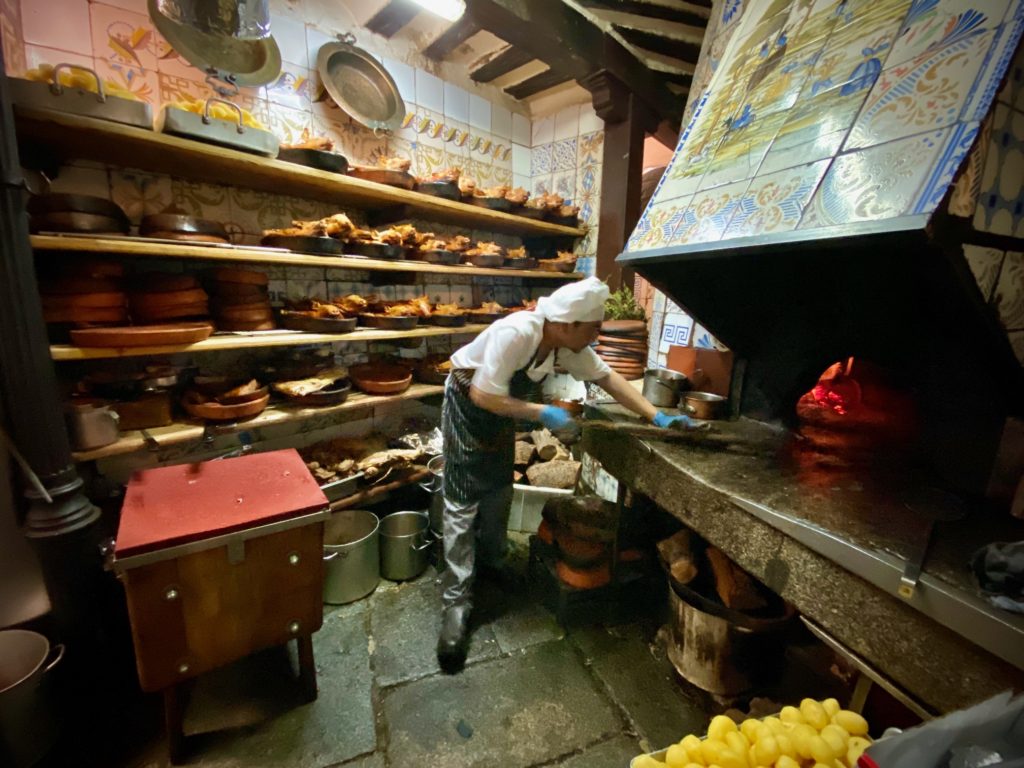 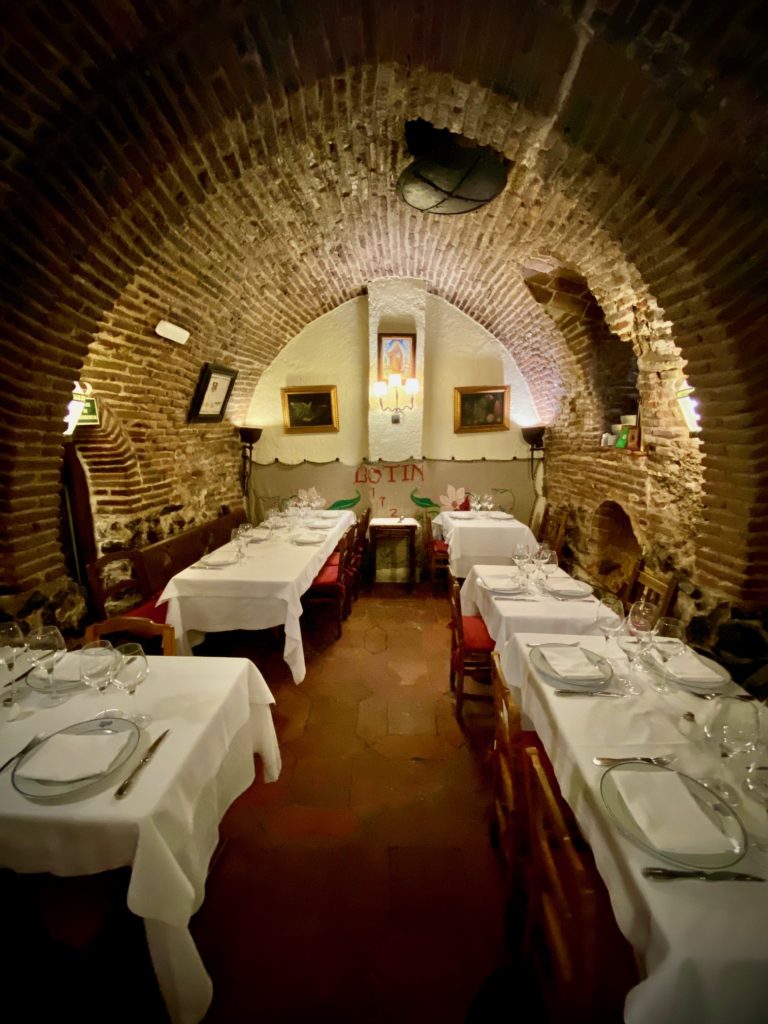 After breakfast, we grabbed a few All Day IPAs and decided to walk around the town before our Prada Museum tour. We walked around the city for a few hours, taking in the great architecture and designs of the city ( found some shots for the bottles around the city), then it was time for our tour. Unfortunately there was no photography inside the museum. The tour was led by Devour Madrid. A company that took us around the museum where we learned about old Spanish art and artists, and saw some of the most beautiful paintings from the 1600s, and afterwards took us out to eat at the oldest restaurant in the world called Botin. At Botin, we had a private tour around the restaurant before they opened to the public, giving us a chance to get some photos without people sitting down to eat, and an inside look at cooking one of their most famous dishes, succulent pig. we also got a mini tour to the basement, which is usually off limits to the public. There we learned that they had a flood in the late 70s, where it destroyed hundreds of bottles of wine in the cellar. We had some great food (succulent pig), some good laughs, and said goodbye to our tour group. From there, Valerie and I walked around the city for one last night before heading to Barcelona in the morning. We found a little hole in the wall bar that luckily had some All Day IPAs so we decided to sit down for a few. Then we headed to the hotel to rest up for the big day of traveling and tour of Sagrada Familia! 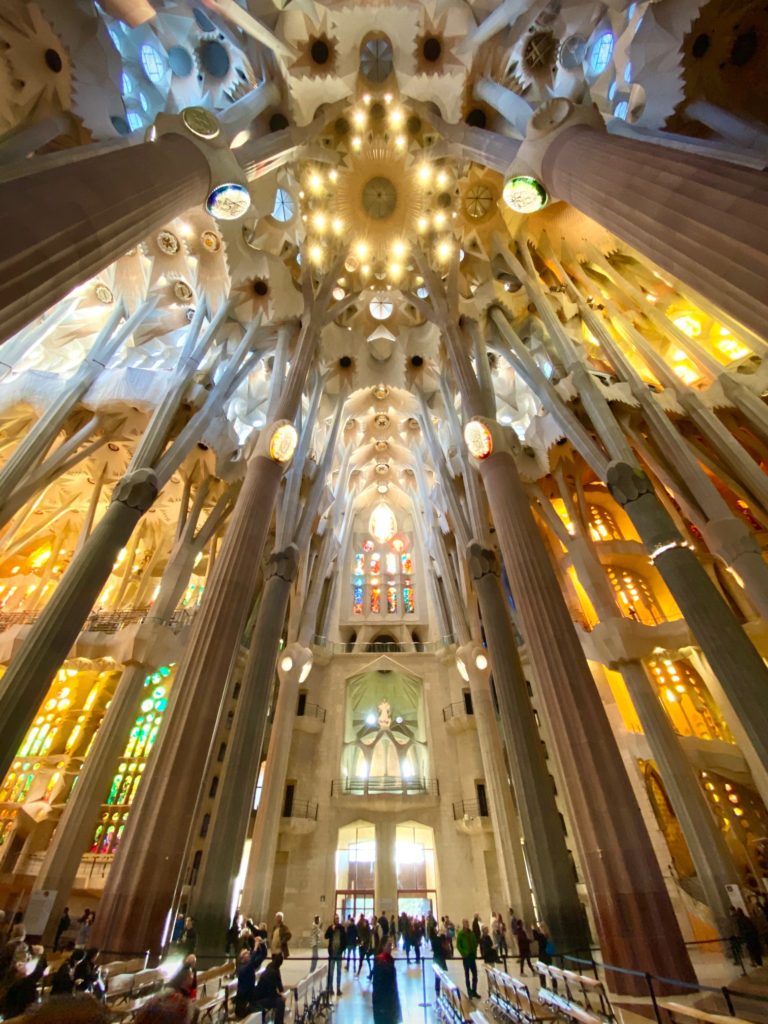 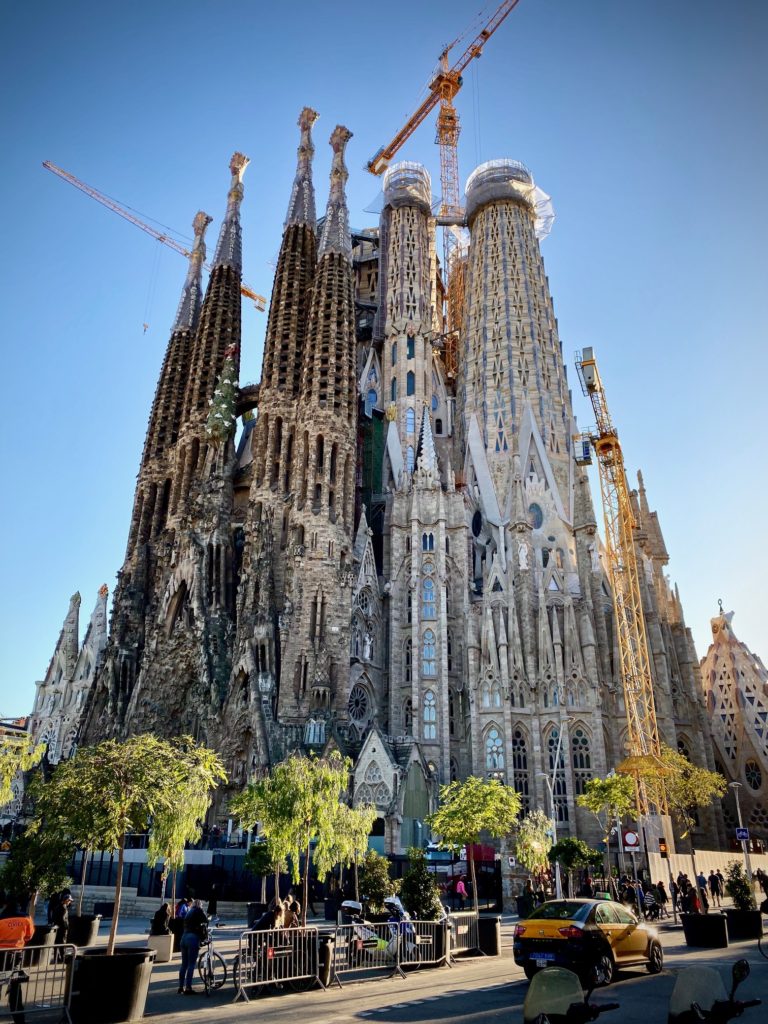 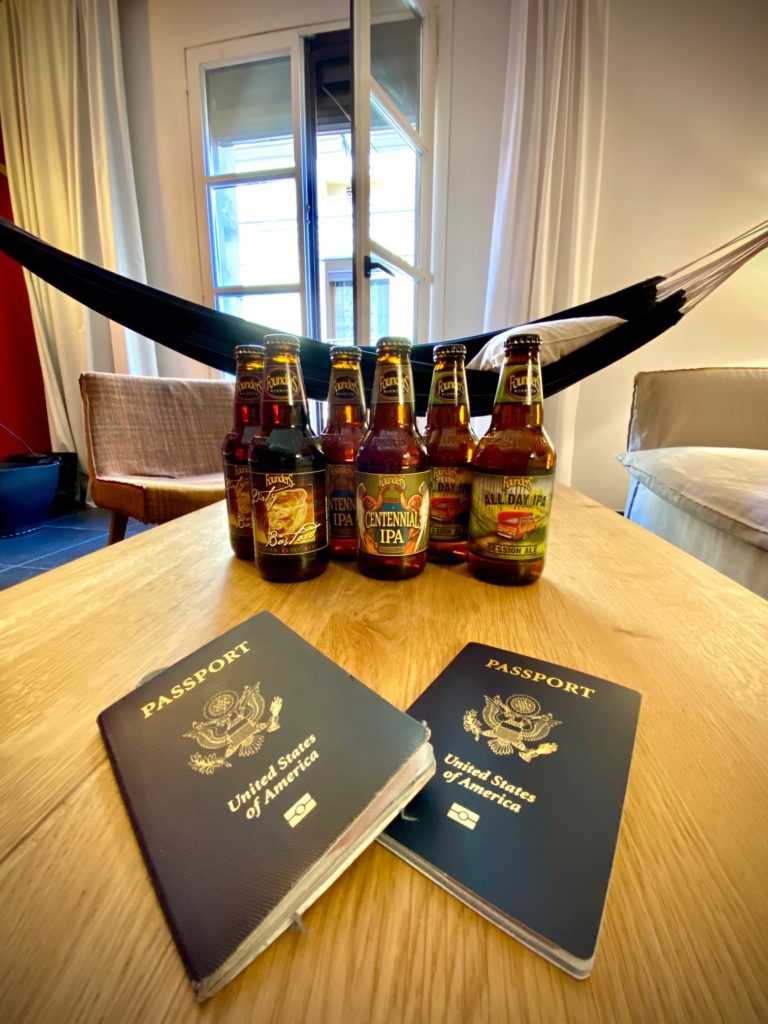 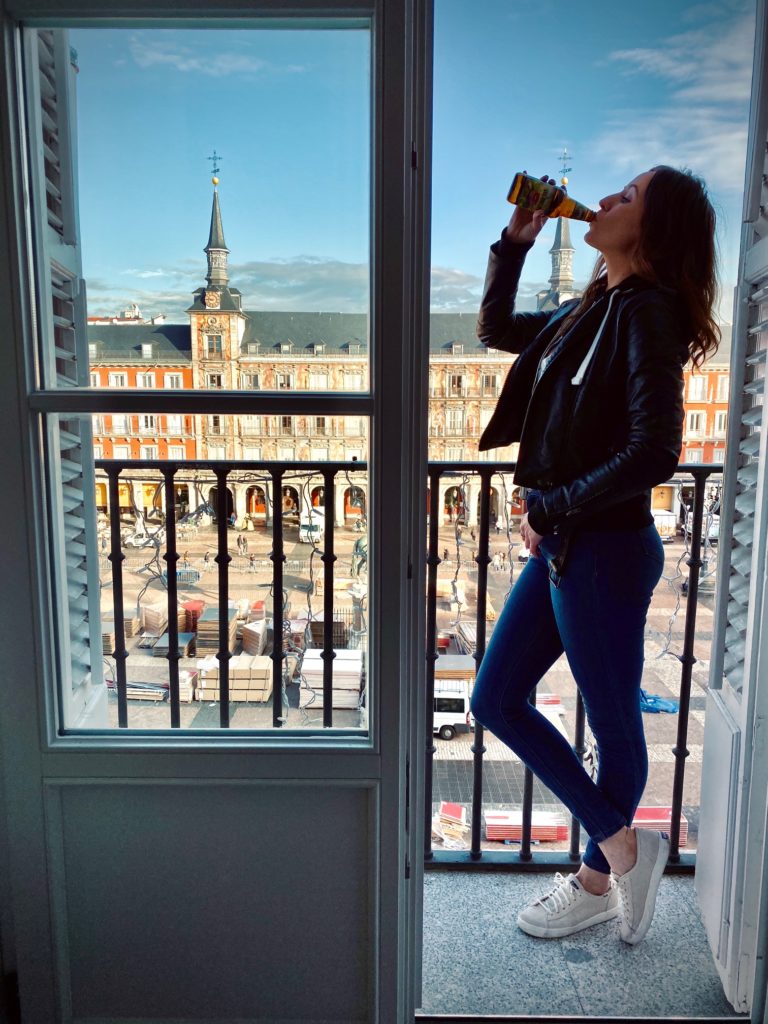 We started the morning off getting one last breakfast at the hotel, before packing our things up for the train ride to Barcelona. We got a few more photos of us hanging around in the hotel room and drinking some founders overlooking the Plaza Mayor. From there our driver Jose picked us up and dropped us off at the train station (which had a jungle inside). From there it was a 2.5 hour ride to Barcelona, where we took the metro to our hotel. Once we got all checked in, we were surprised by some more Founders beers in our room! We quickly had a beer and headed out for our tour of the largest church in the world, the Sagara Familia. This building has been under construction for over 100 years. It is unlike anything you would ever imagine. Pictures don’t do it justice. Designed by one of the greats, Gaudi. The outside of the church tells the story of Jesus, all designed for the light of the rising sun to bring the story to life. As the sun hits different parts of the church, it explains parts of Jesus’ life. As the sun sets, it hits different stained glass and statues that depict his life. quite impressive. After we took the tour, we headed back to the hotel for some rest after a day of traveling. 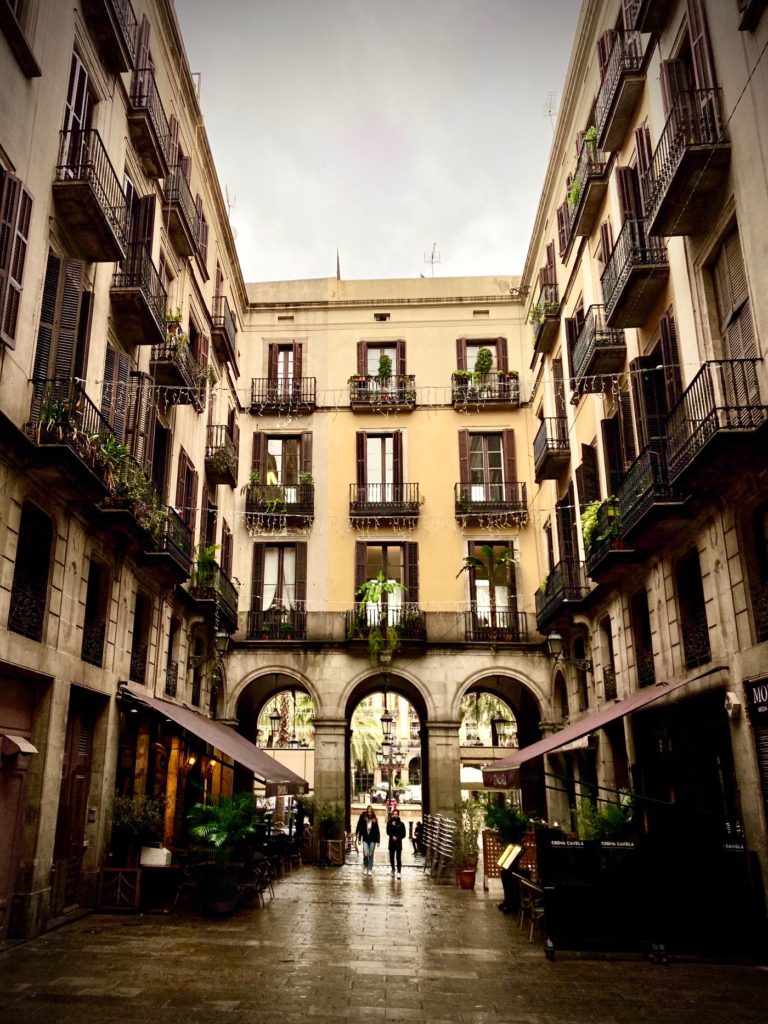 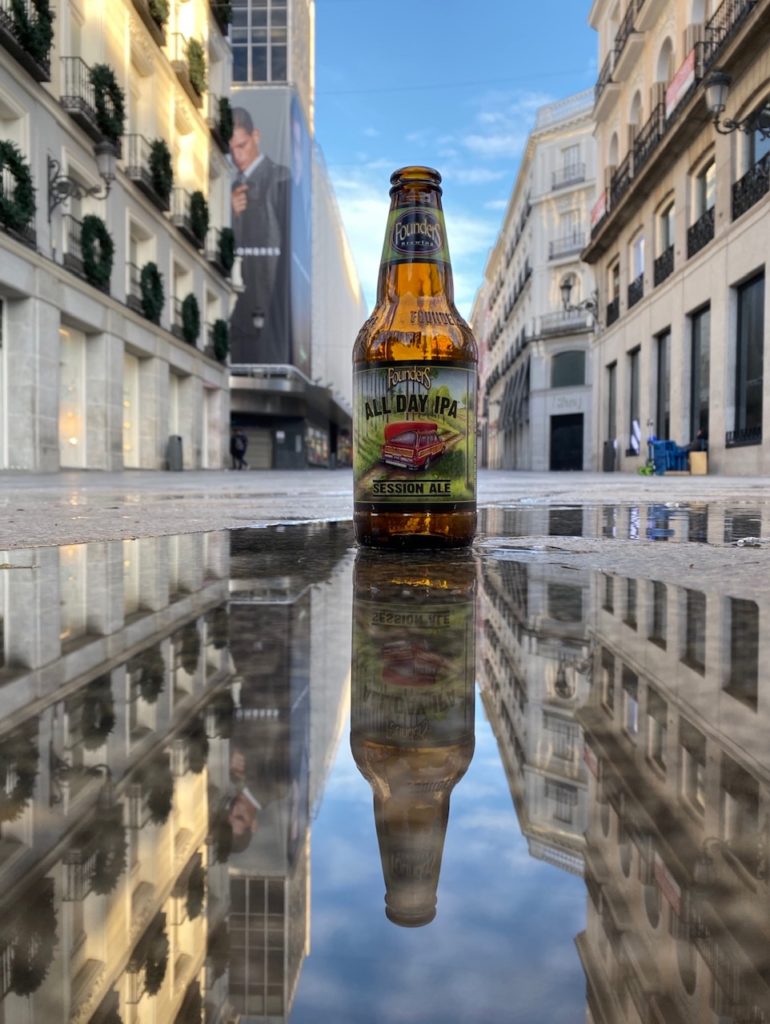 We woke up to rolling thunder shaking the hotel, and shortly after received the text that our hot air balloon ride was canceled. We didn’t have much planned for that day other than the ride, so we decided to walk around the town and explore Barcelona after the rain ended. We ended up in a little park in the middle of town with a ton of birds roaming for food. So we decided to get some seed and throw it out to them. We walked around and saw some of the unique architecture the city has to offer, and walked up on a big camp town in the middle of a busy road. People protesting for the right to have Barcelona become its own state. Kind of crazy to witness in person. We ate some great food, had a few drinks, and headed back to the hotel for a relaxing night. 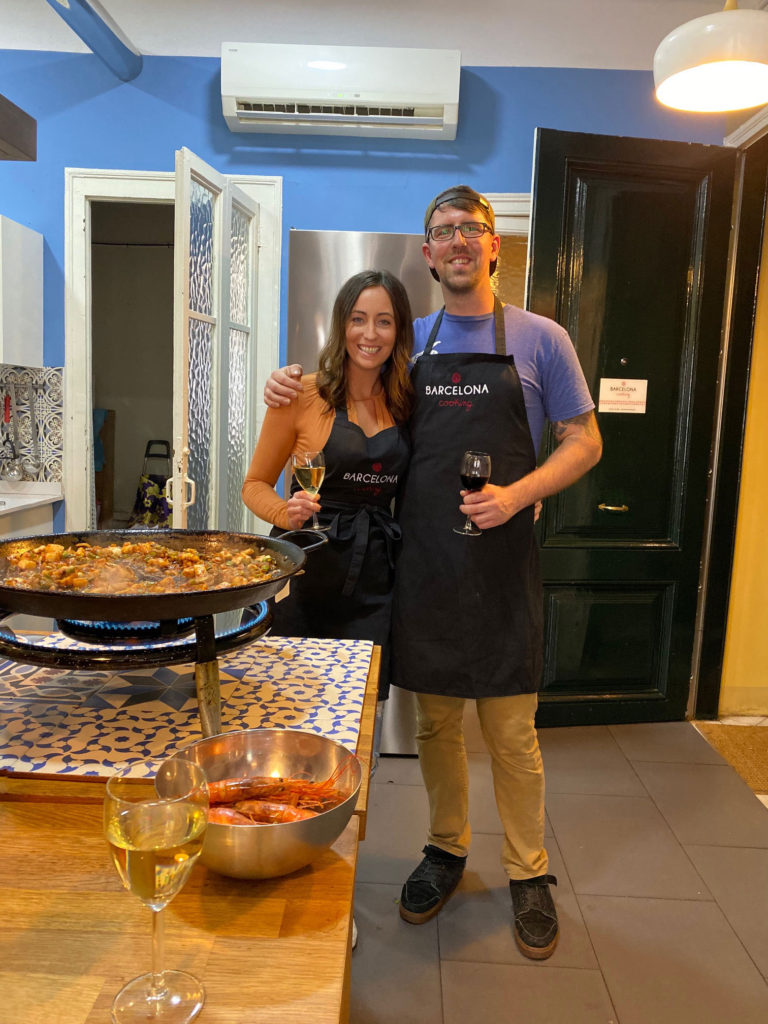 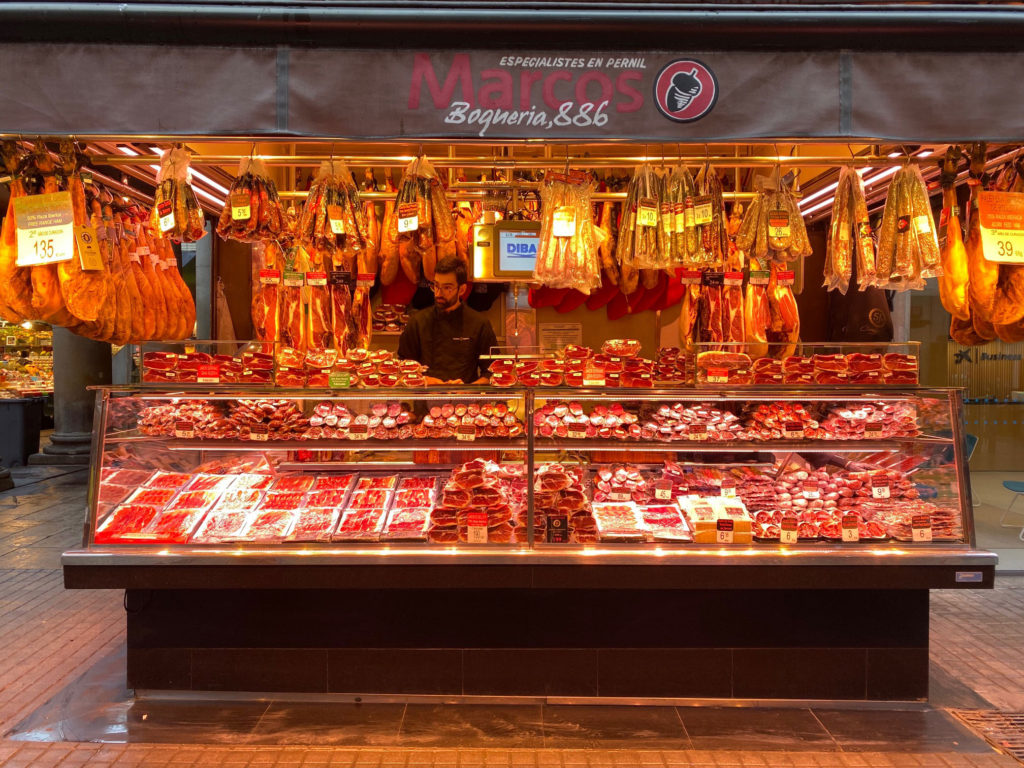 Day 7 we walked to the Barcelona cooking school to learn how to create some authentic Spanish dishes. We all met at the school, and then headed over to one of Barcelonas many markets called St. Josep LA Boqueria. There are some booths here that have been owns for multiple generations of families. people put their lives into selling people fresh, delicious produce shipped in daily from local farmers. The food was amazing, and the prices were very affordable. We picked out our ingredients we needed and headed back to the school to cook. We made a butternut squash/pear soup, seafood and rice with clams, prawn and squid, and for dessert we made a creme brûlée. It was a great way to spend our last full day in Spain. After the cooking class, we headed out to a few local spots for some drinks. we tried some fancy drinks local to Barcelona, and enjoyed a day out and about before our farewell dinner at Biercab. There we tried a lot of different beers, ate some great appetizers and talked about how much we loved our trip. after a night of fun, the morning came way to quick. we ate our final breakfast and got ready for a full day of traveling back to the states.

Big thanks to Josh and Valerie for sharing their trip with us. Hope you enjoyed living vicariously through it as much as we did!