UPDATE 3:30pm 9/10/16: Tribute on the Grand will go on rain or shine! The forecast looks like it will be clearing up before 4pm, however we suggest bringing rain gear and chairs for seating given the grass will be wet. Beer dinner attendees should dress in layers as it may be a bit windy on the Gillett Bridge. See you out there!

Join us September 10, 2016 for our FREE, all-ages celebration, Tribute on the Grand! The event, featuring live tribute bands, food trucks and a beer tent, will take place from 4-11pm at Ah-Nab-Awen Park in downtown Grand Rapids.

Proceeds from the event will support Grand Rapids Whitewater, a group of individuals, rowing and paddling clubs, anglers and businesses dedicated to helping Green Grand Rapids achieve the dream of putting the namesake rapids back in the Grand River for everyone’s enjoyment. Their goal is to partner with the city to create a safer, more exciting river experience for everyone. 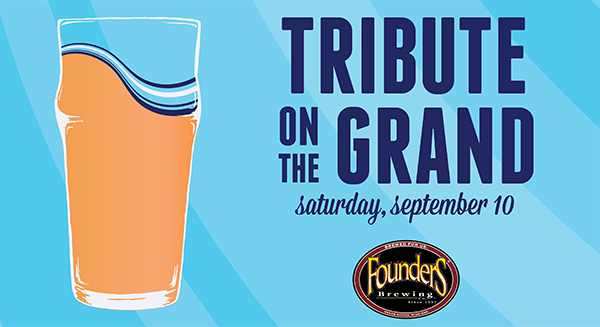 We will also be hosting a sold out beer dinner that evening from 5:30-8pm on the Gillett Bridge, adjacent to Ah-Nab-Awen Park and overlooking the Grand River. Our Co-Founders, Mike Stevens and Dave Engbers, will be hosting the dinner, where we will beer serving our Michigan-only release, Palm Reader alongside beers brewed just for the event.

A taste of the bands who will be live at Tribute on the Grand:

Linkedin
« Founders Fest 2016 Recap!
Show Us How You Session Boldly with All Day IPA »
« Previous Post
Next Post »

2 Comments on “Tribute on the Grand: a FREE Event Supporting Grand Rapids Whitewater”