We announced our lineup of eleven Philly Beer Week 2014 events today, including an All-Star Road Show event on Sunday, June 1, from 4-11pm at World Cafe Live. “All-Star” refers to both the draft lineup and the FBC All-Stars, the official brewery band, who will be playing a live show that evening.

The All-Star draft lineup for the Road Show will include some of our specialty and Backstage Series releases, a few taproom one-offs never before on draft outside of our taproom in Grand Rapids, Michigan, and some surprises. There will be 18 beers on tap.

Workout will open the night followed by the FBC All-Stars—a super group made up of the brewery’s finest musicians (including brewers, the production planning manager, warehouse manager, deli manager, taproom manager, two bartenders, and a cook)—for an entertaining evening of music and beer.

Tickets are $10/ea with a portion of the proceeds being donated to Live Connections. They can be purchased here beginning on Friday, April 18, at 10am EDT right here: http://bit.ly/1m317tb.

The All-Star Road Show official after party will start at 11pm at BRU Craft & Wurst.

Other Founders Philly Beer Week events include an annual beer dinner at the South Philly Taproom on Monday, June 2, and tap takeovers at spots including the Prohibition Taproom, Lucky’s Last Chance and Varga Bar. All events can be found on our site right here. Or on this poster: 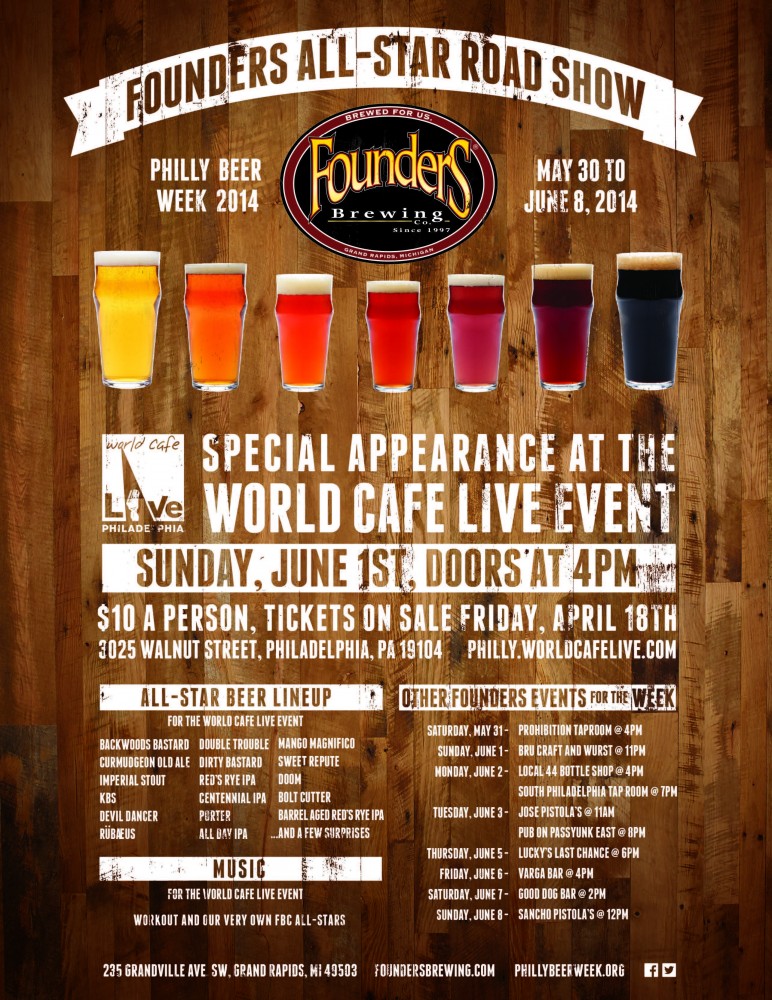 Linkedin
« #FoundersSession Sweepstakes
Dissenter Imperial IPL Is Our Summer Backstage Series Release »
« Previous Post
Next Post »
We use cookies on our website to give you the most relevant experience by remembering your preferences and repeat visits. By using this site, you agree with our use of cookies. Learn More
Cookie SettingsACCEPT
Manage consent