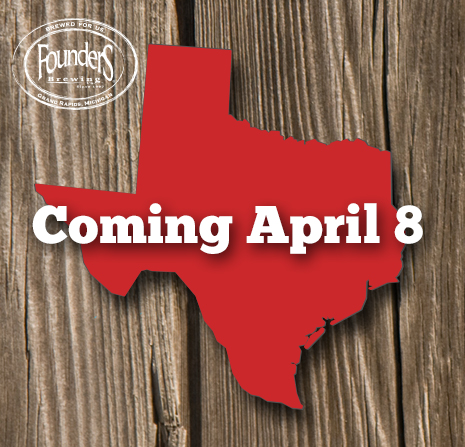 We’ve partnered with Ben E. Keith Beverage Distributors to offer our beers across the Lone Star State beginning April 2013. Texans will now have the opportunity to enjoy Founders ales without having to leave the state.

“Texas is an up-and-coming market, and we’re impressed with what we’re seeing there,” said Co-Founder & CEO Mike Stevens. “We’ve been getting more and more inquiries from Founders fans in Texas over the past couple of years. The Ben E. Keith team is dedicated to the craft beer market and is helping introduce complex brands like ours to eager consumers who are hungry for them. Besides, we’ve always wanted to get Founders beer to Willie Nelson’s home state. Now the time is right.”

“We are delighted to partner with Founders,” said Specialty Division Manager at Ben E. Keith Kevin Nettleton, “and are eager to distribute their esteemed beers in Texas.”

We plan to include all of our year-round and seasonal ales as draft product in the first shipment for an April 8 release. Bottled beers will be released in May, and specialty releases will be available following the release schedule from there.