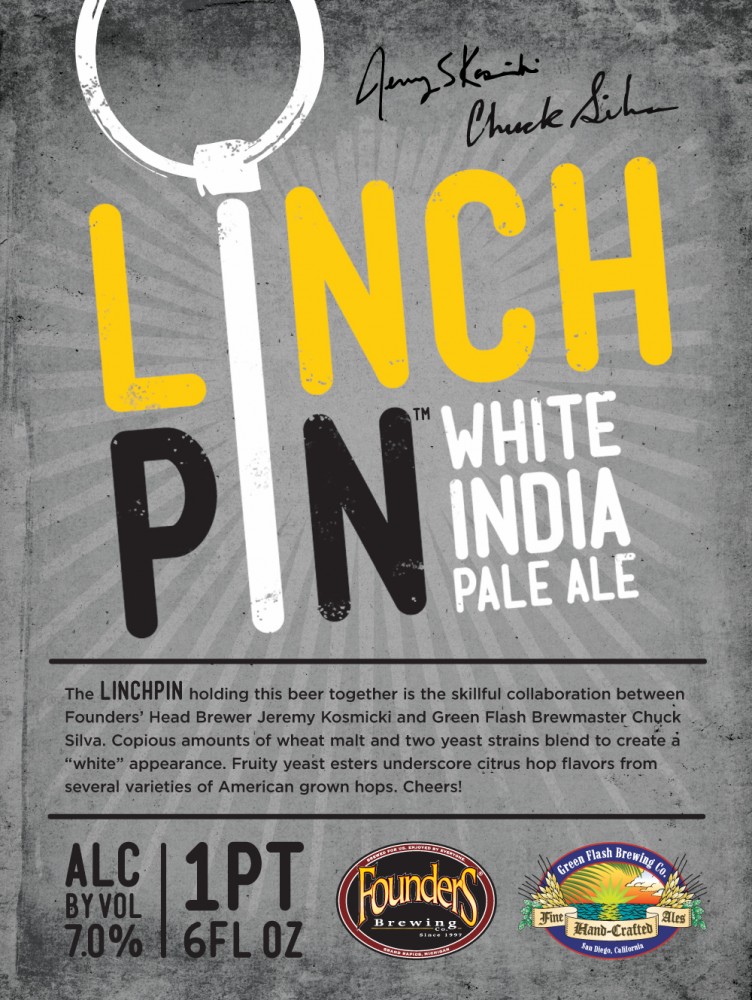 On April 12, we announced that we’ve partnered with like-minded California brewer, Green Flash Brewing Co., to produce a first-time, limited release called Linchpin White IPA. Our Brewmaster, Jeremy Kosmicki, partnered with Chuck Silva of Green Flash last month in San Diego to develop the beer. It will debut during the Craft Brewers Conference in San Diego and move on to limited release beginning May 2012. Both of our breweries have been brewing up several of the world’s top flavor-forward ales, so we decided it could be fun to come together to collaborate on an uncommon and emerging beer style.

“Founders makes world-class beer,” says Green Flash Brewing Co.’s Co-founder and President, Mike Hinkley. “It’s not available in San Diego, so I always look to taste some when I am on the road. Our Sales Chief, Jim Kenny presented the idea, and I was immediately all for it. Then Chuck and Jeremy settled on White IPA. I can’t wait to tap these kegs and share this innovative new release with the national community of craft beer fans.”

Each brewery is known to push boundaries in creating risky, new, flavor-forward styles that appeal to the true beer aficionado. Because Founders is not currently available in San Diego, the collaboration will allow the California craft beer lover a chance to experience our beer in their native state. Green Flash will release Linchpin White IPA on draft during May’s Craft Brewers Conference with events to take place as follows:

“There’s a lot going on in this beer with two yeast strains, copious amounts of wheat malt, and a big focus on ‘C’ hops to deliver a citrus explosion,” explains Green Flash Brewmaster, Chuck Silva. “In fact we lined up more than a dozen hop varieties in the brewery to select three hops with the biggest citrus character to dry hop the beer.

“This golden beer pours with beautiful, frothy white beer foam that lasts due to bottle conditioning. Gently rousing the yeast that settles in the bottle will result in a fuller texture and a more cloudy white appearance. The citrus aromas that jump from the glass are largely tangerine up front with other types of citrus notes that mingle with the Belgian yeast esters. Hop flavors of bitter orange zest dominate the brew and linger to the finish with a nice play of American and Belgian yeast combo.”

A beer with so many components can be held together with a “Linchpin”. The official “Linchpin” of this beer is the skillful collaboration between the two breweries to create a unique hop-forward brew. Linchpins are symbolic: two simple shapes that combine to strengthen a bond amongst many different pieces.
Linchpin White IPA will be released during the May 2012 Craft Brewers Conference in San Diego and will then be available in limited supply via bottle-conditioned 22oz bottles and by the keg for special release events nationally in May and June 2012.

Green Flash Brewing Co. is located in San Diego, California, and was founded in 2002 by Mike and Lisa Hinkley. Brewmaster, Chuck Silva, leads brewing operations. Green Flash is an award-winning brewer of fine, hand-crafted ales, and specializes in brewing assertive and distinctive beers, such as the nationally acclaimed West Coast IPA: an award-winning beer whose wide acceptance has helped define a category.  Green Flash brews ten styles of beer regularly, on draught and in bottles as well as a growing lineup of seasonal and special offerings, including several barrel-aged beers, throughout the year. Please visit the Green Flash website for more information

2 Comments on “Linchpin White IPA: Our Collaboration with Green Flash”