We are excited to announce quite a few changes that we’ve made to the Founders brand calendar for 2013. Our new calendar is summarized graphically here: 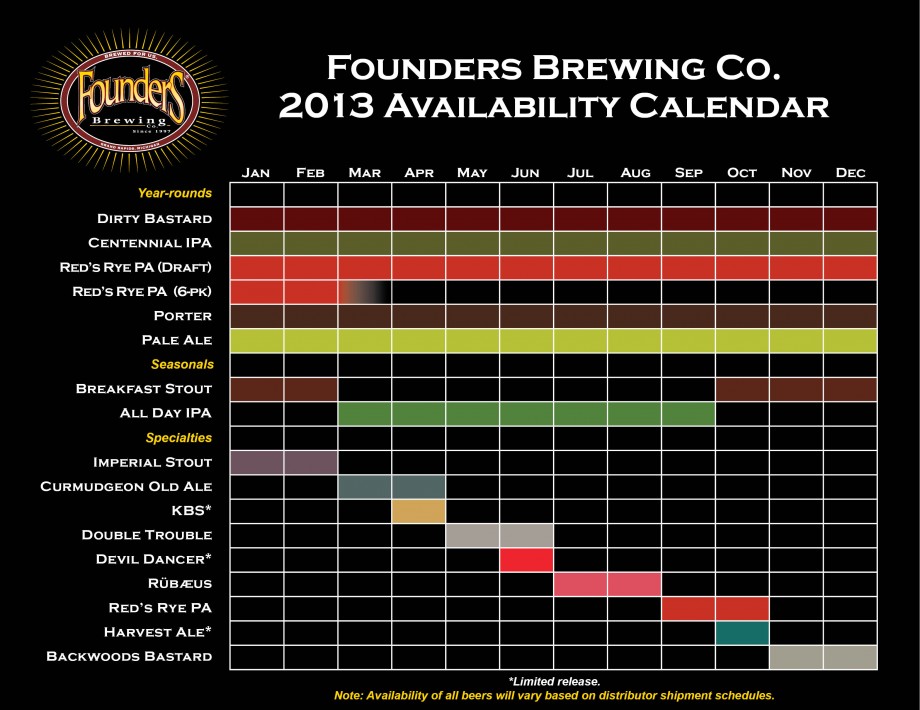 Most noticeably, Red’s Rye PA will only be available on draft year-round, beginning in March or April of 2013. Our bottle release will be limited to a specialty, four-pack release in September and October. The final Red’s Rye PA six-pack batch will ship in February 2013.

This was a hard decision for us to make. We love Red’s Rye PA, and we do not want to limit its availability, but it’s the right thing to do for the sake of the quality of the beer. Red’s Rye PA carries a shelf life of 90 days, which means it is tied with Harvest Ale for having the shortest shelf life of any of our brands. Extensive lab analyses have been conducted, and they have validated this shelf life again and again.

This limited shelf life holds true for Red’s Rye PA in bottles and Red’s Rye PA in kegs; however, the out-of-code Red’s Rye PA that we’ve found in the market has overwhelmingly been bottles. This is mostly because kegs have a faster sell-through rate, but draft has other built-in shelf life benefits such as constant refrigeration and a totally concealed container that protects the beer from light exposure.

By shortening Red’s Rye PA’s period of availability, we alleviate shelf life concerns due to the shorter window of availability. Specialty beers tend to have a much faster sell-through rate than seasonal and year-round beers.

We aren’t taking this decision lightly. We discussed modifying the Red’s Rye PA recipe to extend the shelf life, and researched it for some time, but it simply wouldn’t be the same beer. As difficult as this is, we aren’t willing to compromise our recipe and a beer that we believe in just to get it on the shelves longer.

Finally, by moving Red’s Rye PA into the specialty category, it will be moved from a six-pack to a four-pack package, and the price per bottle will increase. Red’s Rye PA has always been an expensive beer for us to make; its cost is more in-line with our specialty beers, but we blended  our margins for years to try to make it work. In the end, we’ve had to accept that this is the right thing to do for one of our greatest beers. As is always the case at Founders, producing quality beer comes ahead of concerns about profits.

In 2013, Founders will offer two seasonals: Breakfast Stout (October through February) and All Day IPA (March through September). Both of these beers will be available in six-packs and on draft. We have hop contracts in place that will allow us to brew enough All Day IPA to ship it out to all of our markets for a retail launch on March 1, and we couldn’t be more eager to share this beer with even more people than in 2012, when we had a limited release. And, yes, if you didn’t catch that, we are going to move Breakfast Stout from a four-pack to a six-pack when it is released again in October 2013, and it will maintain the same suggested retail price of $9.99. [UPDATE: As of August 2013, we made the decision to keep Breakfast Stout in a 4-pack after having switched All Day IPA into our year-round lineup and with an eye out for blended margins with our 2014 seasonal offerings. Stay tuned for the 2014 calendar.]

Double Trouble will be moving to our specialty lineup, with four-pack and draft availability in May and June.

Next, we have swapped out Cerise in our lineup with a re-release of Rübæus, our raspberry ale that hasn’t been released since 2008. This is a bittersweet change (pun intended). It’s hard to say goodbye to Cerise, but the cherry crop in Michigan this year was devastated and we had little choice. On the other hand, Rübæus is a beautiful beer and is one that we’ve been asked to bring back year after year since we retired it. Rübæus will join our specialty four-pack lineup for a July and August release.

Moving along, you may also notice that we have extended the availability of many of our long-standing specialty beers to two months rather than a one-time release. Our increased capacity has allowed and will allow us to make much more Imperial Stout, Curmudgeon Old Ale and Backwoods Bastard than we have in the past. We are going to do what we can to make each of these beers available for the two full months that are listed on the calendar above, though Backwoods Bastard availability will remain somewhat limited because of the barrel-aging process. KBS, Devil Dancer and Harvest Ale will continue to be small batch releases because of the cost and production constraints of these beers. KBS has moved from a March release to an April release to fit in with our updated calendar. More details on the KBS release will be announced soon.

In case that wasn’t enough for you, we may have some more additions up our sleeve for 2013. As we like to say, you never know what Founders is going to do next.